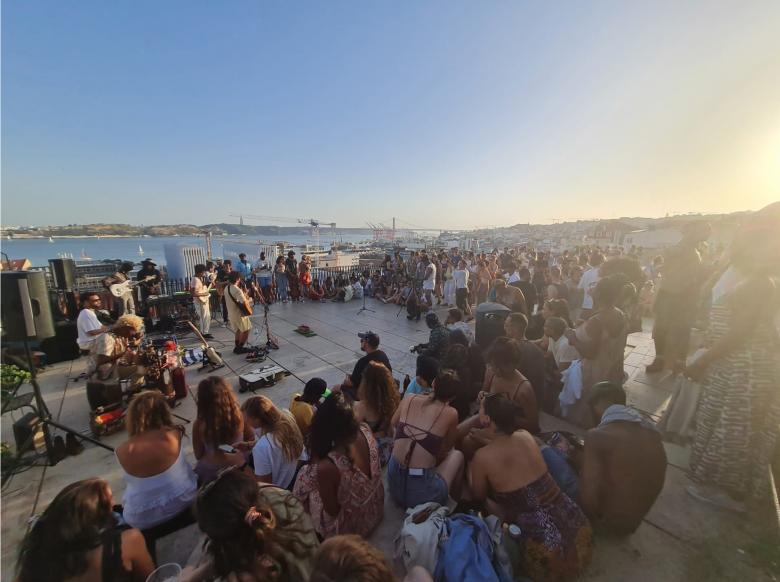 Lisbon has always had a rich history of international settlers, with people moving from all over the world bringing their music, poetry and art. Today is no different. Lisbon is growing faster than ever with a wave of global citizens wanting to relocate here. However despite the ongoing developments, there are still some challenges when it comes to showcasing the cultural side of the city.

I sat down with Angolan activist, artist, musician and MC Mistah Isaac, to discuss the music culture in Lisbon, why he created the Wako Kungo Sessions and his vision for Lisbon’s cultural future. Having lived in Lisbon since the age of 11, his heart is firmly grounded in Portugal. Music has run through his blood since a very early age, and he wants to see the city of Lisbon spoken culturally. We all know about the cultural movements in London, Berlin and Paris, and Lisbon is becoming a tiny melting pot which is growing in music and art, and it’s time to put this city on the cultural map.

Challenges of being an artist in Portugal

Surviving life in the music world is a challenge for anyone. It requires a great deal of strength and resilience to survive. Nowadays, being talented and hard-working is no longer enough to make ends meet. And this is especially true in Portugal. No matter whether you’re a musician or a photographer, it is a constant fight to be recognised and to be able to live through the art you produce.

There is a huge wave of new artists coming to Lisbon from around the world, which is a testament to the city’s growing cultural stature. However, many artists are paid under the minimum wage. A musician or DJ can play for around 4 hours and be paid €50 for the night. A vast pay gap compared to other European cities, where independent artists can get around €200 per night. Unfortunately, Portugal doesn’t value the arts such as music, theatre, painting etc. as much as other European cities. This is slowly changing, and Mistah Isaac is on a mission to spearhead Lisbon’s cultural standing.

The birth of Wako Kungo and the Renaissance Artists

The pandemic was tough for all businesses. But it was especially challenging for independent musicians, artists, actors, and the like, who overnight had no more money coming in. A lot of musicians in Lisbon quit the arts to find work elsewhere, such as construction to make ends meet. However, for the small percentage of artists who stuck it out, which Mistah Isaac refers to as the “Renaissance Artists”, it was tough for them to find venues where they could play or even get decent pay. As a musician himself, Mistah Isaac decided to help them get back on their feet by helping them to find gigs. But it was also challenging for him to find venues that would host them.

In February 2022, CoCasa joined forces with Mistah Isaac to provide its venue for artists of all genres and disciplines to come together to play music and poetry. Events were organised once a week at the old CoCasa venue in Bica, which provided free and spectacular performances. This was a new platform for unknown artists to come together to create new energy, synergies and art, and thus the Wako Kungo Sessions were born.

What started with gatherings of around 20 to 50 people has now grown to 300 people, with gigs happening across the city. Known musicians from all over the world are also donating their time to play for the Wako Kungo Sessions because they believe in the dream and vision: a platform that brings talented artists together, a movement and home that is theirs, a free space to do what they love and showcase their work.

CoCasa and Wako Kungo share a synergy and vision when it comes to social impact. Not only are they platforms for growth and co-creation which belong to everyone involved, they are also using music as a form of social activism and social impact. The shared goal between both platforms is to pay artists more fairly and to use money as a form of change and social impact in an industry that is known to squeeze artists. By empowering artists to play for their worth, this will tip the value scale and in time become the norm for all venues across the city. They will also no longer need to play at venues who devalue their art, which will empower them and show them that their art is valuable.

Wako Kungo also launched the Women Empowerment Movement, a gig organised just for women artists. The first event took place at Galeria Movart in July which was a great success. The music industry is known for being cut throat and competitive, however being a woman in the creative industry presents further obstacles, such as sexual harassment, abuse, chauvinism, and social labels that woman still fight. To tackle these challenges and support women artists, Wako Kungo provides a safe and inclusive platform for women to showcase their work. In Africa, when you say you educate a woman, you educate an entire civilisation.

Providing an educational platform and community for artists

When artists get to a new city it’s hard for them to know where gigs are, where other artists are hanging out, and where they can play their music. Especially for young artists, it is very hard in the beginning to get themselves out there and find places to play with good conditions. Thanks to Wako Kungo, new artists in the city can come and showcase their work, and as a result four bands have been made since its inception.

Mistah Isaac wants to create a Wako Kungo label where talented artists can come and be part of the movement, and where up and coming musicians can be discovered. His vision is for Wako Kungo to also act as a school to teach young and established artists about managing their money, getting gigs, and getting smart about money. Teaching them about the management and business side of playing music. About intellectual property, royalties, and that sometimes the art they create today might not reap the rewards straight away but can further down the line. Most artists don't know anything about this, and a lot of them are badly paid in Portugal and do not know the value of their art.

“When you create a project, it is really important that you have three impacts: social, environmental and economic” explains Mistah Isaac. He wants to ensure that every Waku Kungo session positively impacts the lives of the artists with fair pay and visibility, the audience by creating good vibes and community, while also ensuring that locations where they play are clean when we leave them, and that the audience protects and respects the location and its surroundings.

Why culture and music are important for society

Culture is still widely undervalued in Portugal. But this is gradually changing. It is now not perceived as something to be consumed after work, but as something which is crucial to human health. Unfortunately, the government doesn’t consider it like that… Yet! They still put little focus on cultural endeavours. However this is also gradually changing with more grass-root events sprouting across Lisbon and other cities. This is a great feat especially when you consider that the regime only ended less than 50 years ago, during which time there was little to no regard for cultural or intellectual stimulation. The country has therefore come a long way in a short time.

People are hungry for culture and music. Culture informs, teaches, and opens paths to new possibilities. It sets us free. It creates a sense of belonging, equality and union. We need to encourage more presence in shows and more cultural activities. Forms of artistic expression which ignite hearts and remind us of the important things. When we do this, we help people to promote equality, freedom, anti-racism, and anti-xenophobia.

Wako Kungo was created to raise social awareness for all those who are listening to the artists. It is critical that people listen to what every artist has to say because they are an important part of society as artists, creators, and educators. Mistah Isaac perfectly sums this up in his own words: “Each one, teach one, because every big tree was small once”.

Come join the movement and spread the word. There are many exciting new plans on the horizon for Wako Kungo and for the many talented artists who have joined this movement.

Come and watch Wako Kungo’s events around the city and keep up to date with listings by following their Instagram: https://www.instagram.com/wako_kungo_sessions/. For more information, you can also visit the Wako Kungo website: https://wakokungosessions.com/